I have had my 2006 Toyota Tacoma for a couple of years now. After the recent frame replacement, I decided I was going to keep it for a few more. With that, it was going to need some upgrades.

One of the first in the list of upgrades was going to be some side steps/armor. Being back in Colorado and the near return of bowhunting in Colorado mountains, the side armor is essential for not damaging the body while up in the woods.

The first step was to identify what I wanted for this. Looking for something that won’t mess too much with my current mileage, that has a good style to match with my truck and a decent price point.

The next was to get them on order. You can see from the featured image, that step is complete. I decided to go with these Tyger side steps for a couple of reasons.

Thankfully this kit supposedly comes with everything needed to install and they install in pre-drilled Toyota frame holes. No reason to make an extra trip to the hardware store to buy nuts, bolts, screws or washers.

Next was to get them installed. 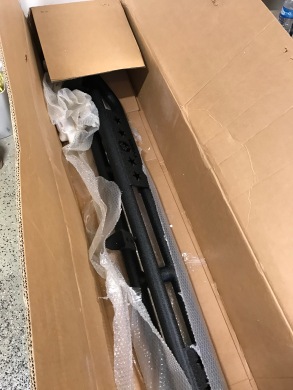 Out of the box and bubble wrap and off to alignment. The only thing resembling instructions, unfortunately, was a sticker about 2″ in length on the wrapping that said passenger side. I am pretty self-sufficient and mechanical, but I would expect a little bit more. Also, while this kit said it came with everything needed to install, it did not have any bolts in the box. So I had to make a trip to the store anyway 😦 ! While I was underneath the truck examining where these mounted, I realized the holes (while capped) were full of road grime and crap.

While at the store trying to figure out which size bolts that I needed to use to get these steps mounted, I opted to pick up an M8 x 1.25 tap to clean up the threads prior to attempting to put bolts. Bolts and tap purchased, now back to the garage to get some more work done.

Once home, I used the tap to clean up all 12 bolt holes.

Time to start lifting and lining up the side steps into place. Six bolts per side with clean threads, went into place without a problem, maybe 30 min worth of work.